Responsibility Charts – Giving them a whirl…

Cameo, Parenting, She's Crafty
When I told my mother that I was making Responsibility Charts for Lila and Lucy, she said, “Oh, ever the teacher you are, Tara.”
And maybe that’s true.
I’ve struggled with whether or not Responsibility (or Chore) Charts are the way to motivate children. As a teacher, I frequently heard about trying to “intrinsically” motivate children, rather than “extrinsically” motivate them. Essentially, children that are intrinsically motivated do things because it makes them feel good; it gives them a sense of accomplishment and pride. Children that are extrinsically motivated do things because of the prize at the end – whether it be monetary, tangible, or otherwise.
As adults, I think that a great deal of our motivation is extrinsic. We want money, so we go to work. Oftentimes, we moan about our jobs, but we don’t quit, because we really want that money. Yes, there are times when we feel that intrinsic reward; we are praised for our work, or we feel that burst of pride when we cross the finish line of a marathon, or hammer the last nail into our cedar deck. But mostly, we want the dough.
And that’s why some parents offer money as a reward for A’s or B’s in school. And it’s also why there is speculation that those kids have a tougher time achieving those goals or give up on them; that extrinsic (or external) motivation just isn’t enough to encourage them to seek help or work harder.
So there. It was a tough decision for me to decide about these boards. I knew that my eldest, Lila, would love such a visual display of her accomplishments. She also could use some encouragement to complete tasks on her own. There are only so many times you can help your four-year-old get into her pyjamas when you realize, “Hey, didn’t she put her clothes on by herself this morning? What’s going on here?”
I compromised with myself. I decided to try the chart, but try to keep her goals varied and not just focused solely on menial tasks. We included the use of manners without being prompted, and of sharing her toys. I hoped that these two goals would fit into the “Catch Them Doing Good” model of reward. I don’t ask her to do these things, but if I see her do them, I reward her.
So far, so… medium.
She does share and use her manners, but it’s still a challenge. She’s nearly-four, so I guess I can’t expect miracles. 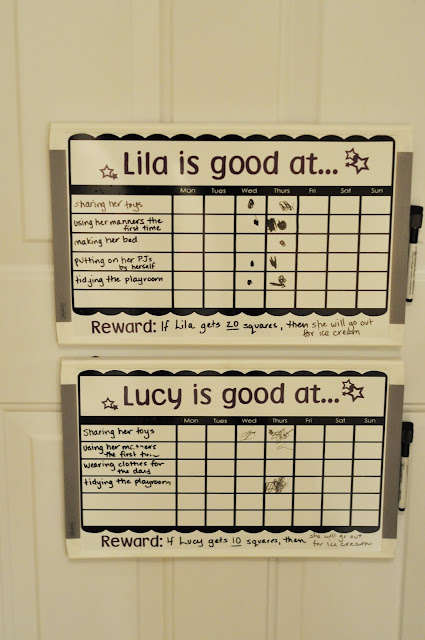 Hubby thought that Lucy shouldn’t be left out. Of course, she’s only two, and could give a rat’s ass about what her board says and if she gets to color in a square. She sometimes runs excitedly to the board to color in a manners square or a sharing square, but for the most part, she shakes her head furiously and shouts, “No!” when I ask her to participate.

And whatever. It works for some kids (and ages) and fails fantastically for others. 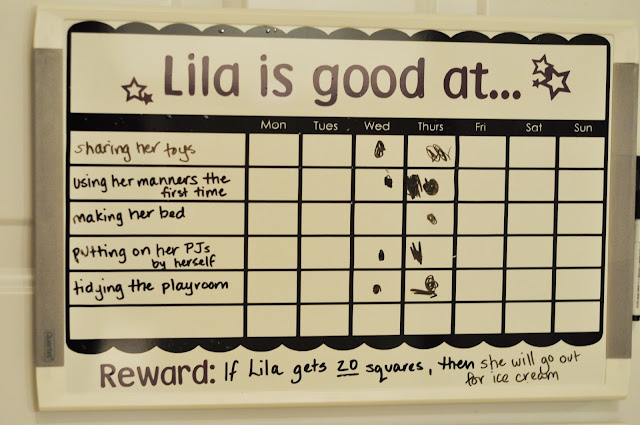 The boards are just magnetic dry-erase boards that I picked up at Wal-Mart. I used the Cameo to cut out a chart (on the Silhouette Gallery, under “Chore Chart”, I believe) that I resized to the dimesions of the board. I also cut the days of the week out of the vinyl; this way they can’t be erased when the board is cleared by clumsy preschooler’s hands. It took some patience on my part to get the vinyl chart onto the magnetic board without huge creases and wrinkles. I’m still learning… but that doesn’t make it any less teeth-clenched-and-blood-boilingly frustrating. Hubs did wander over to me while I was finishing the project and quietly said, “Do you need any help? I haven’t heard you swear like that in a long time….”

(Not to worry, the kids were sleeping at the time. I didn’t increase their vocabularies through the magic of crafting failures)

He also accidentally dropped a few crumbs from the snack he was eating onto some sticky-side-up vinyl resting in front of me. By the look in my eye, he knew to put on his helmet and dive into the trench. This was going to be a blitzkrieg of Wife Attack, and he needed to take cover. So no. I didn’t need his help.

We’re three weeks into this Responsibility Chart thing, and like I said… it has its successes and failures. She enjoys marking down her accomplishments, and we’ve reached two rewards already. We will probably change up her goals fairly soon, to keep things interesting, but I think that overall, her personality really meshes well with the chart thing.

I intend on making some magnets that visually depict her goals. She can’t read what I’ve written, though she’s memorized her goals upside-down and sideways. I think that it will mean another level of independence if she can mark her accomplishments without me standing three inches from her, showing her where to mark it.

We will have to see if Lucy warms up to it with time, if ever. She’s a stubborn little mule… a chart just may not be the carrot that leads her.

Homemade Granola Bars That Don't Taste Like The Forest Floor!