Cooking with Kids: Breadmaker Crescent Rolls (with a breakfast version) 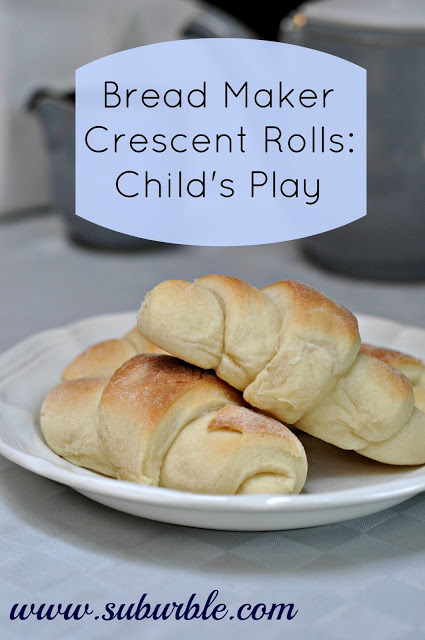 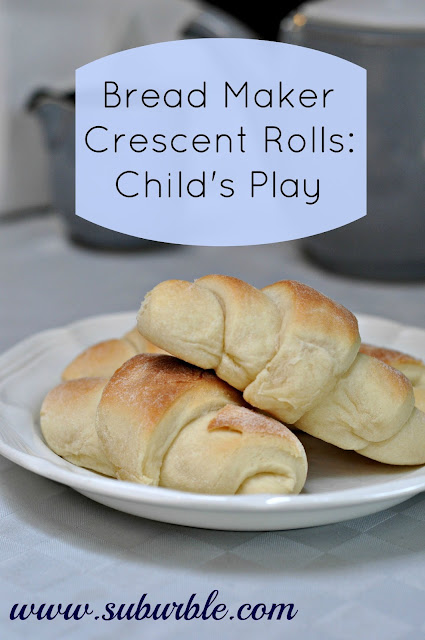 I know, I know… the nineties called, and they want that bread maker back – and maybe the Alanis Morrissette c.d., too – but they can’t have either!

I am the proud owner of a bread maker, and I actually use it! I do make loaves of bread from time to time, but I find it is most useful for dough. The machine does all of the manual labour, and that speaks to the Lazybug that lives inside of me. 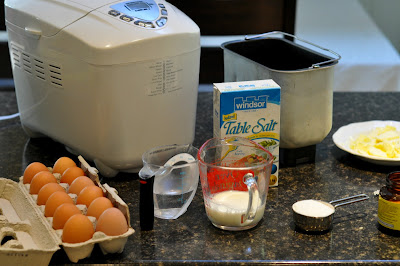 Today, Lila and I made homemade crescent rolls (not the kind you find in a tube in the refrigerated section) using our trusty “kneading machine”. Lila is a pro at the bread maker. If I measure out all of the ingredients and direct her, she can assemble them and get the machine to dough-making status all by herself.

We made the Sweet Dinner Rolls from Allrecipes.com. This recipe is quick, easy, and always a hit.

** You’ll need an extra 1/4 cup of butter when assembling the crescent rolls. 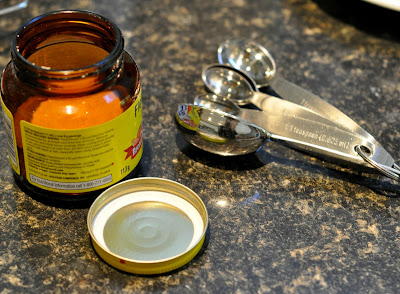 Since I use a jar of yeast that I keep in the fridge, I sub 2 1/4 tsps of yeast for the “package” measurement.

Lila was able to add all of the ingredients herself, so long as I told her the order.
Occasionally, she does that backwards hand-flip type of pouring; the kind where her hand seems to contort backwards and all of the ingredients slide out in the opposite direction than intended? It’s like Motor Skills Gone Haywire. I watched closely to make sure that her aim was good. 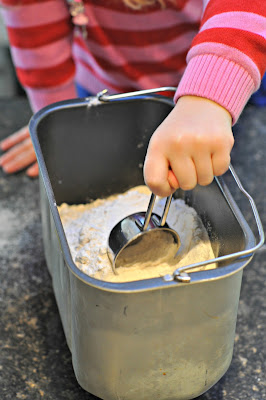 Make a well for the yeast; be careful not to dig so deep as to reach the liquid. 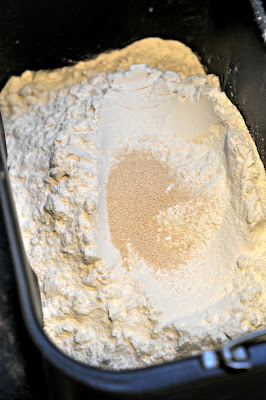 Ignore your mother and dump the yeast all willy-nilly. 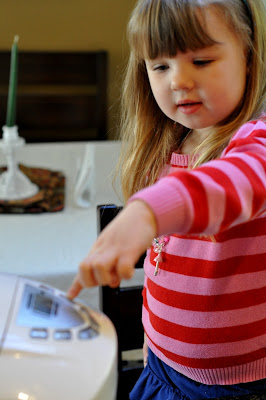 Select the “dough” setting and press Start. Go find your younger sister and begin Operation: Stealth Torture. Continue this for roughly 1.5 hours until the bread maker beeps. Wonder why mother continues to babble on about “quiet time”… 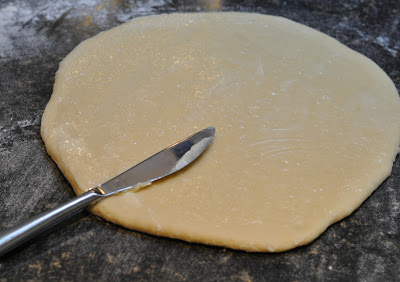 Take out dough and split into two equal balls. Roll each ball into about a 12″ circle and then spread the 1/4 cup of softened butter across the surface. 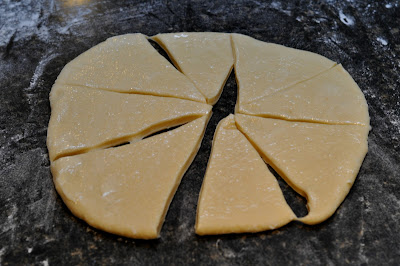 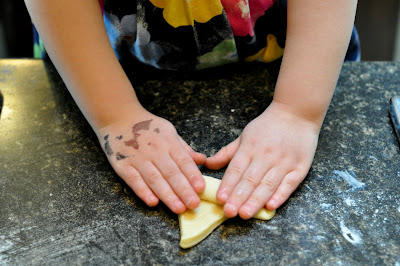 Roll each triangle, beginning from the wide end to the point, into a tight little crescent shape. Please disregard the disintegrating tattoo on Lila’s right hand. I didn’t remember that it was there until reviewing the pictures. 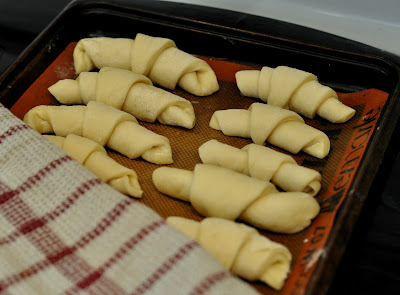 Place completed crescent rolls (can you tell which ones had a four-year-old’s touch?) on a pan, then cover with a clean tea towel. I use a Silpat, because I love it and I think I have a co-dependent relationship with it. You don’t have to use any sort of liner. Also, be warned, some silicone liners cannot stand the same level of high heat, so be sure to check the standards of your own liner if you decide to use them in temperatures of 400 degrees and higher.

Leave rolls somewhere warm to rise for about an hour. In an oven with the oven light on is usually enough warmth.

When the hour is up, remove the tea towel and then put the crescent rolls in a 400 degree oven. If you used the oven as a warming place, you can take the rolls out a few minutes early to allow the oven to pre-heat.

Bake for about 10-15 minutes – watch them closely, as they brown very quickly. Take them out, let them cool for a few minutes, and then devour them. It helps to sometimes hide them under that tea towel as they cool, so you don’t continuously jam them in your face, leaving a crumb mustache and a guilty expression.

Not that I’ve ever done that… 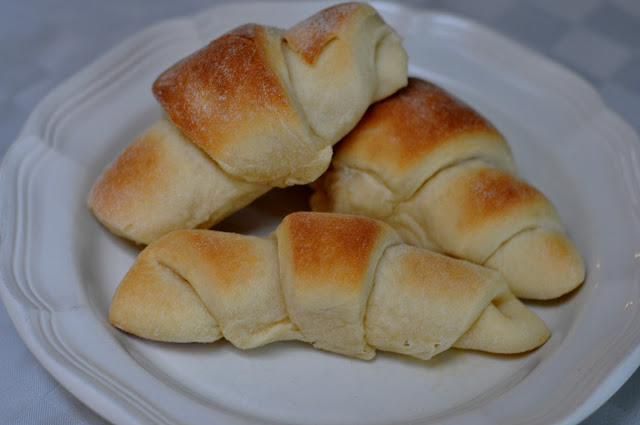 Yum. These rolls are great with soup, chili, or even as a nibbly snack to have at lunch or with tea. 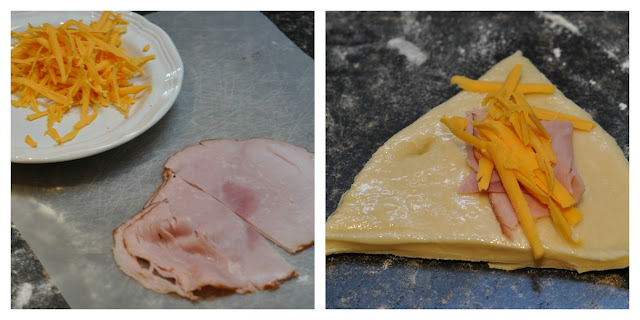 If you’re feeling a bit cheeky and you want to dress up these fabulous little rolls, you can turn them into ham and cheese crescent rolls. I grated up some cheddar and sliced up some nice ham that we bought at a deli. We placed a small bit of both on the wide part of each crescent and then rolled them up tightly. Lila helped with this part, too, though I did have to re-roll her crescents as they must be rolled quite tighly to avoid cheese leakage. Is there a more formal term for that? Cheese meltiness?

We baked them at 400 degrees as well, but the ham and cheese variety of roll needs to bake for the full 15 minutes. I picked a few of them up off of the pan to be sure that the bottom was browned and that the sides were no longer soft, like dough.

Nothing says, “Good morning, Honey” like a mouthful of ham and raw dough. Blech. 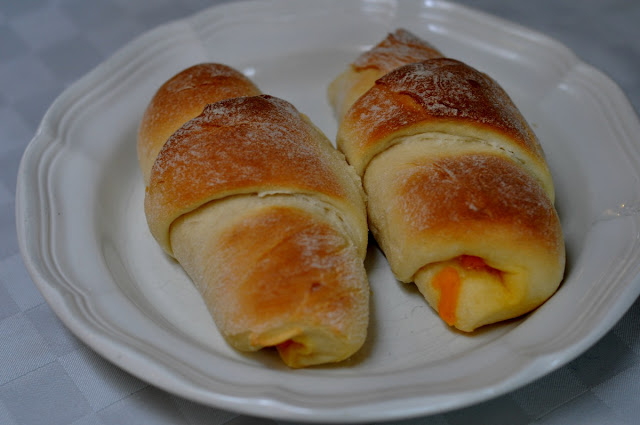 Aren’t these so pretty? Look at that peek-a-boo cheese. They’re the perfect size for a grab-and-go breakfast that isn’t laden with preservatives or artificial anything. 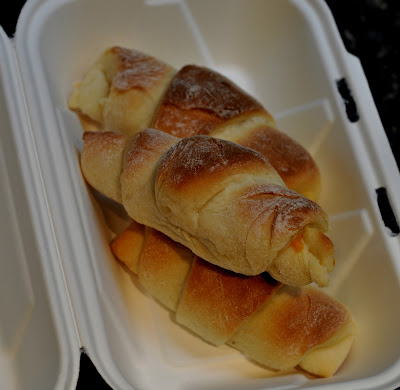 We packed a few of these little darlings up into a (biodegradable!) takeaway container and brought them to Grandpa – Hubby’s dad – who is recovering from a recent shoulder surgery. He was my guinea pig for these little secret-meat-holders, and he gave them two – well, one, but the other’s busy in a sling – thumbs up!

If you try these out, please let me know. They’re one of my most favourite bread maker recipes, and I love that Lila can do most of the work on her own (under heavy surveillance, but isn’t that the life of every four year old?).

Don’t have a bread machine, but want to try this recipe? Check out the instructions at Our Daily Bread to learn how to convert this recipe.

Springtime Is Near: Egg-in-Nest Specimen Art (from the dollar store!)