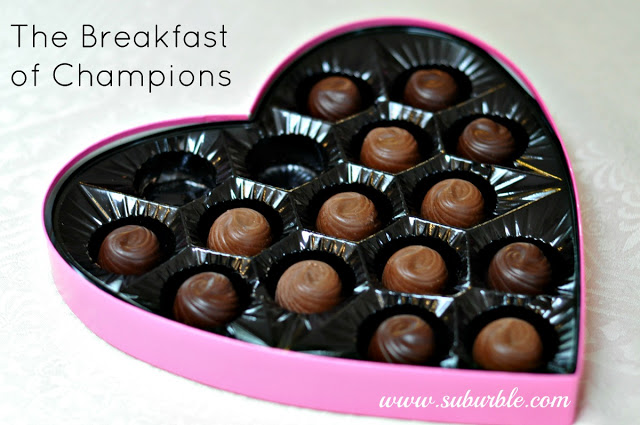 This morning, the girls and I stumbled downstairs (at 6:20 am, which is still considered “nighttime” to many), and found three small boxes of chocolate waiting on the kitchen island.

The girls were thrilled! Dora and Diego chocolates in a heart shaped box!?!?  Hooray!

I was quite happy to pop a few truffles into my mouth – yeah, at six in the morning, this is the part where you judge me – and then savour my husband’s victory. We had decided not to “do” Valentine’s Day this year. I guess I misunderstood the subtleties of that conversation. Obviously we had decided to SAY we weren’t doing VDay, but actually DO it. Hmmm…. point for Hubby! Negative 6 points for me.

The card with sappy lovelies scrawled under the Hallmark-ian poem was his coup. Thirty points for Hubby and a get out of jail free (to be used at the wife’s discretion) card for him.

Today, Lila had her very first Valentine’s Day party at preschool. I don’t know how I missed the memo that Valentine’s Day is the new Hallowe’en, but it seems to be. The kid came home with a heart-adorned envelope bulging with candy. Whoa! Did you have to trick-or-treat for that? And what’s in there? Cough up some of that delicious candy, sister!

Lila’s preschool teachers are clever, clever women, and they denied the children the right to savour candy until their parents appeared at the door. Lila clutched her bag with white-knuckled fists. Her eyes widened as she sorted her loot in the car. “A-NOTHER lollipop? I have four now!” “Is this chocolate? And is this candy!?!?”

Holy smokes… I know that we planned to hand out lolly butterflies this VDay, but I didn’t realize that lollipops were the new black. Or red. Or whatever… I didn’t know every single other kid was giving them out too!

I remember being in second grade, when we’d shake out our envelopes and marvel at the characters printed on the cards. “Oh wow, this is Ariel!” “Hey! Rainbow Brite – that’s so neat!” “Ughh… He-Man…”

And when a tiny bag of cinnamon hearts would make a satisfying “plop” onto my desk, my heart would thrill. Candy! YES! This is a score!

If 6 lollipops, 7 Hershey’s kisses, a Fun-Dip, and a few bags of cinammon hearts had tumbled out of the envelope, I would have been sure that half of the class was head-over-heels in love with me. Seriously guys… I know I’m cute, but come on!

Unaware of their mother’s envy, Lila and Lucy happily snacked their way through the Valentine envelope this afternoon. Aside from the hour where they ran laps around the house and wore buggy-eyed expressions, I’d say that they handled the sugar rush fairly well.

And how about you? Did you handle the “sugar rush” of Valentine’s today? I hope you all had a lovely day, regardless of the exchange of folded pieces of heart-shaped cardboard, or sugary dainties that scream “Be Mine”. And I hope that you knew whether or not you were supposed to participate. Obviously I’m going to have to work on my psychic powers.

Roses On Her Birthday!