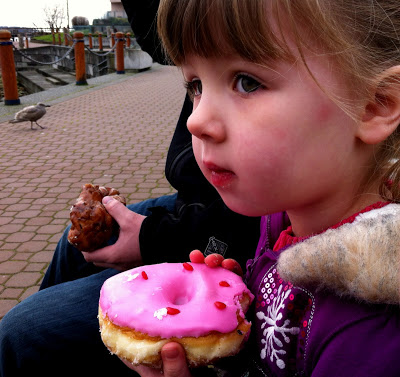 We’ve been keeping up with our Responsiblity Charts, which is a wonderful happening. I didn’t know if the girls would embrace their charts or merely stick their tongues out at them (which is not entirely impossible, if you’ve been around us recently).
Some of our daily goals have been harder to reach than others. Lucy wearing clothes all day without breaking down and weeping for pyjamas has been one of the larger hurdles. (Oh, Pyjama Lucy…. you make preschool drop-off so embarrassing…) Using manners on the first go ’round – rather than being prompted by a parent or sibling – has also been tough.

“Errr… I’m sorry, Tarzan, but you’re going to need to put a few words in there. Me, Mommy. You, Rude.”
I’ve been careful not to use the goals as bribes. If they don’t meet the goal, no checkmark – and that’s the end of that. I don’t coerce or plead or threaten. And yet, Lila still wants to put those little checks onto her board. She catches herself sharing toys or using her manners and the little bulb over her head lights up: “Mommy! I used my manners! I get a checkmark!”
Lucy normally furrows her brow at this point and remarks, “I don’t have checks, Mom. I want checks, Mom.”
So maybe – only sometimes – we may set Lucy up for success in a manufactured setting. Lila just might encourage her to share a toy, or we may stretch the limits on what exactly pyjamas are. (And isn’t that an age-old existentialist question, anyways? What are pyjamas, really?)
And as a result of all of this teamwork and furious checking away, we’ve already reached three end-goals!
A big reward that the girls earned was going to the beach. In February – I know, I know. Coats and boots are a part of our beach wear for almost six or seven months of the year. We were visiting my folks at the time, and ventured to a spot known to the locals as “Glass Beach”. It was a happy little voyage. 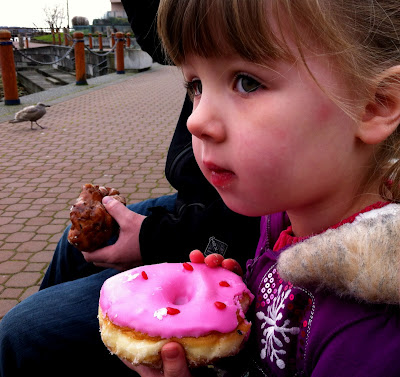 Before we headed down the stairs to the beach, we stopped at the local bakery. Valentine’s Day donuts were on the menu, as is what seemed to be the World’s Largest Apple Fritter (as you can see in my hubby’s paw). 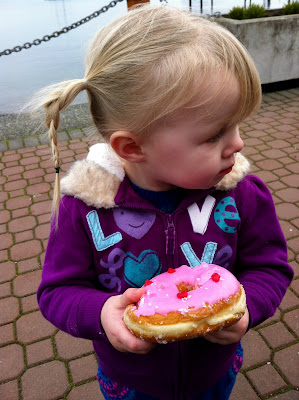 Neither girl ate much of their doughnut. Lucy had one taste of a cinnamon heart and declared the entire thing tainted with “spicy”. Fair enough. At least it looked pretty. 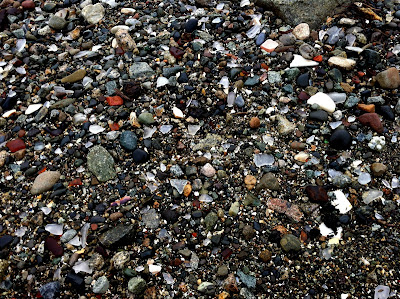 The allure of Glass Beach is that it is laden with beach glass. I have never seen the variety and sheer amount of glass on any other beach I’ve visited. 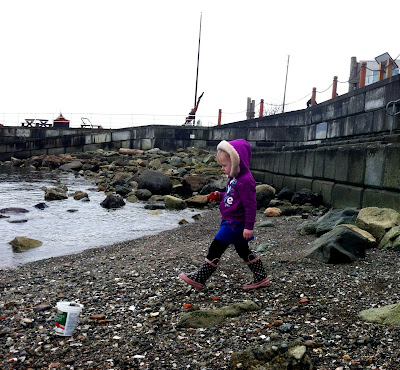 The girls were armed with empty yogurt containers for gathering up their finds. Lucy took the task seriously. 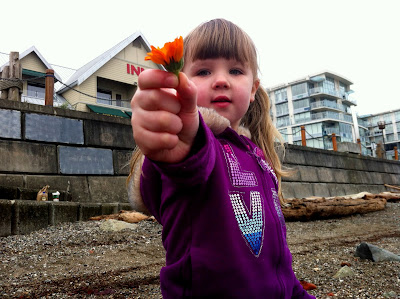 Lila was more easily distracted. And this is so telling of both of my girls. Lucy is more focused, while Lila sees everything. “A flower for you, Mom.” 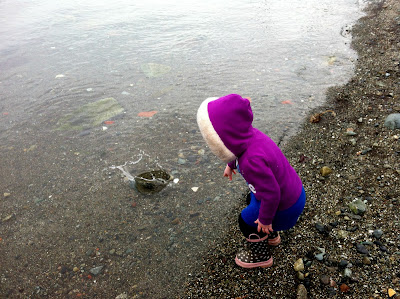 Lucy did her best to skip rocks like Daddy. 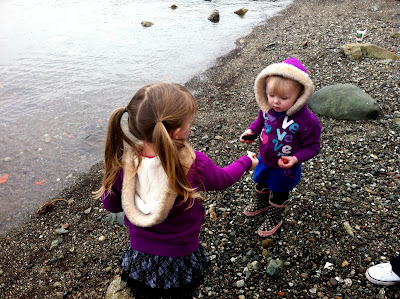 The little trip was wonderful, and despite the way it looks in pictures, the air was surprisingly mild down on the beach. Because it is a tiny protected area, the winds couldn’t get at us. We beach-combed, and “skipped rocks” and nibbled at our doughnuts until it was time to head back to Grandma and Papa’s. I think that all of us felt like it was a fitting reward.

I want to continue having experience-based rewards for the girls because they’re awesome on multiple levels. They’re often cheap (or even free – one reward was going to the park!), they don’t end up cluttering our house, and most importantly, they help us to spend time together making memories.

I know that we’re still new to this Responsibility Chart thing, and the “proof is in the pudding”, as the cliche goes. Will they continue to want to make little checks on the board? Will the rewards become less alluring?

I guess we will have to see what happens!

Sunlight streaming in the window...

Roses On Her Birthday!