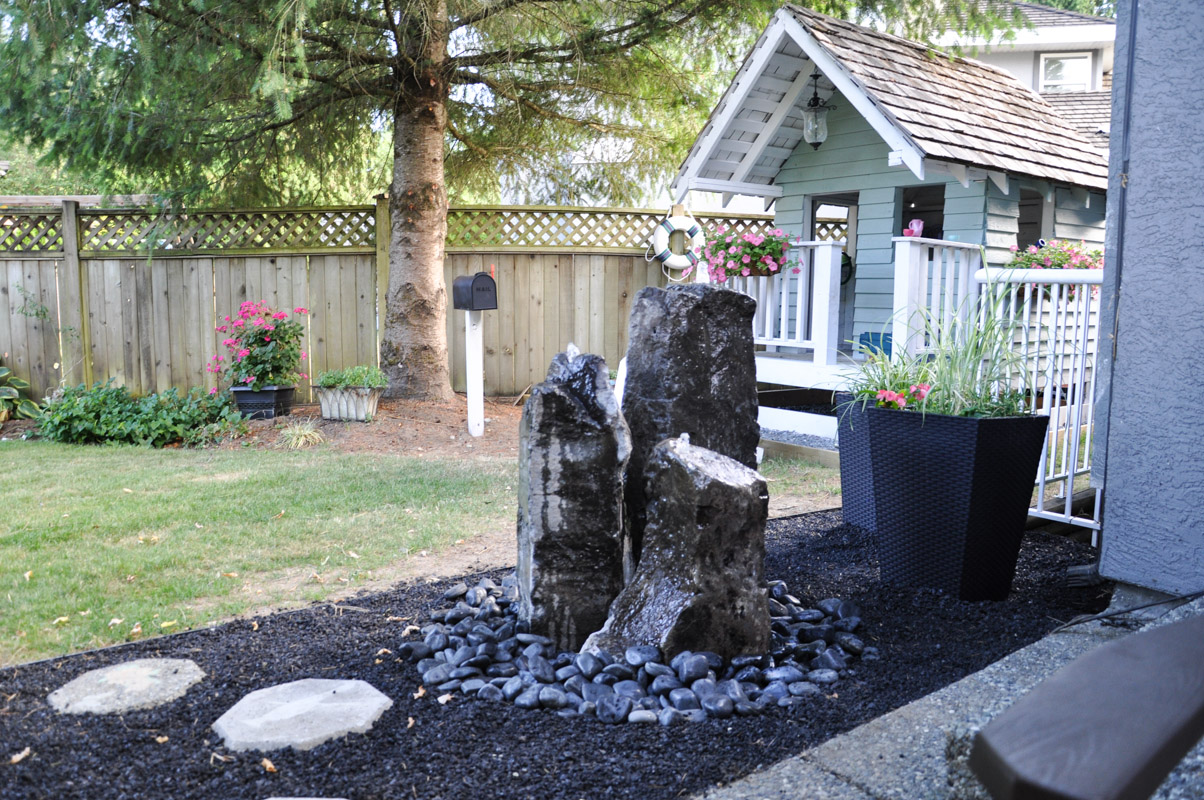 The view from my back patio has never been so fantastic. The installation of our three basalt gurgler water features has not only added beauty to a corner that was previously… un-beautiful… but also the sound that comes from the water tumbling down the rock adds to the ambiance of the space. The streams of water make a gurgling sound.

Mr. Suburble and I were a bit daunted by the idea of installing our own water feature. Were we equipped for this? Was this a resonable DIY for two slightly clumsy folk like us?

I asked these questions of Dianne at Northwest Landscape and Stone Supply – where we got all of our supplies for the installation – and she laughed, “If you can set up a fish tank, you can definitely set up a water feature. In fact, it’s easier to do the water feature!”

I felt encouraged. We were going to do this! So I gathered our tools and supplies, Mr. Suburble gathered his arm muscles, and we were off!

To install your own water feature/gurgler, you will need:

A basin/reservoir with pump chamber
Gurgler/water feature
Dolly
Pump
Three-way Splitter for the pump hose (*Optional* Use if you have multiple gurglers/features in your set-up)
Lengths of hose long enough to travel to the top of each gurglers and reach into the pump chamber
LED gurgler lights and three-way plug
Shovel, arm strength, words of encouragement
Landscape rock – we used Pebble Creek Black Smooth Polished Rock
A GFCI electrical outlet to plug in your pump and LED lighting 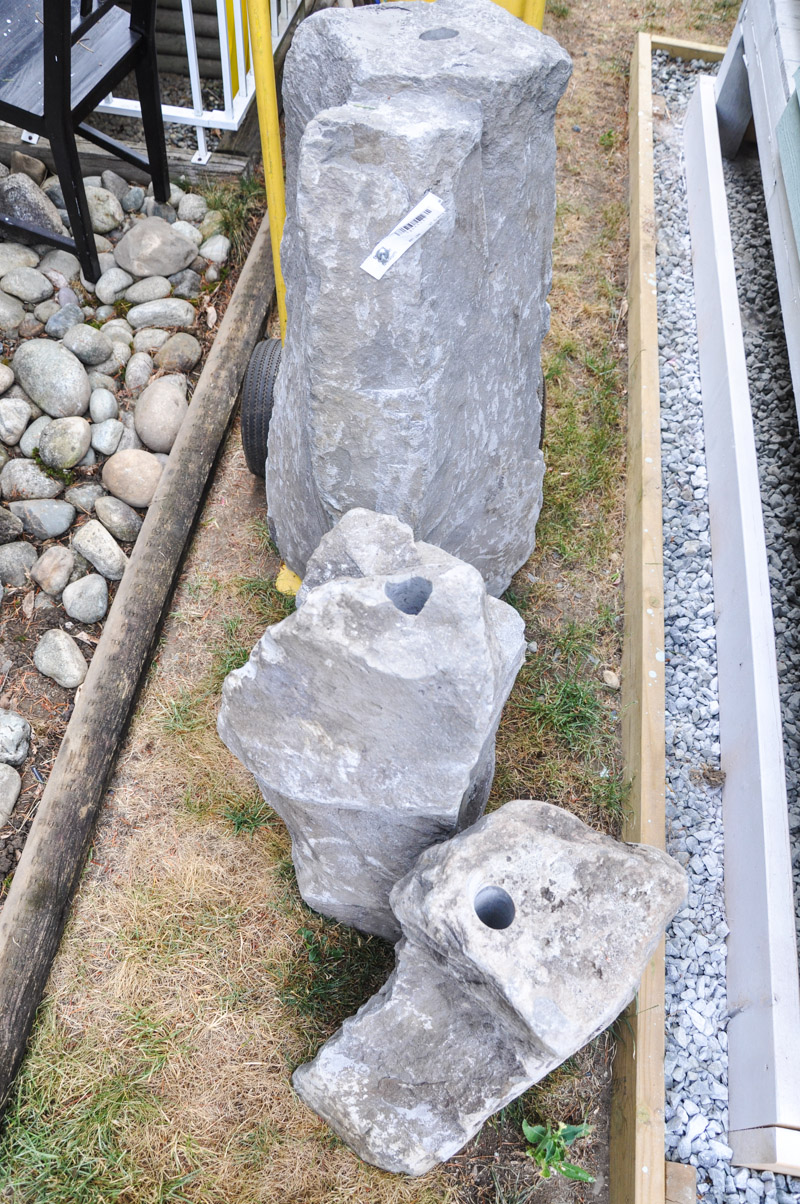 I chose the basalt gurglers at the Northwest Landscape and Stone Supply yard. It wasn’t easy deciding on the perfect rock, but once I found it – I knew.

The basalt – which naturally breaks apart into these beautiful geometric columns – are hand-selected from the quarry in the Squamish-Whistler corridor  and then transported down to the yards located in Burnaby and Abbotsford. They’re quintessential West Coast style, and that’s exactly what we wanted for our space. 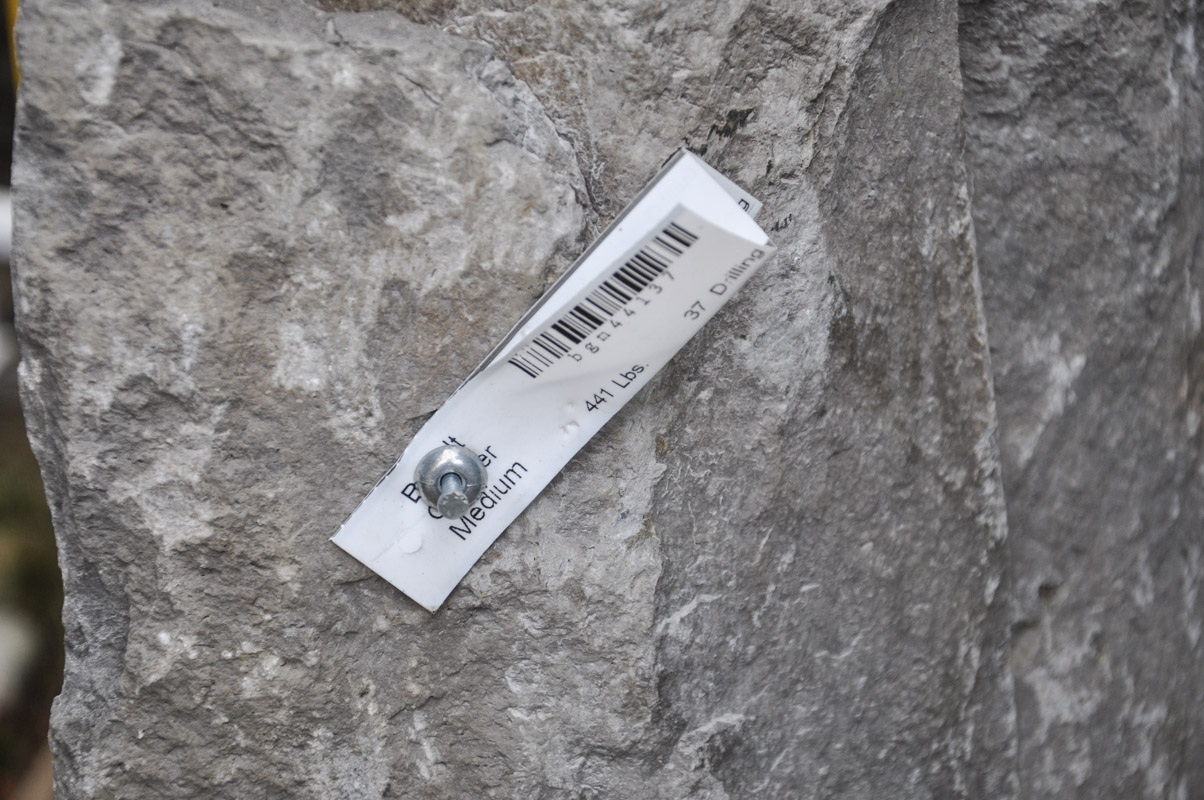 Another thing to note about basalt columns: they aren’t light. The big papa gurgler weighed in at 441 pounds. And while Mr. Suburble is studly in his own right, we opted to use a dolly to cart the gurlers around the yard.

But first, we had to choose a location for our water feature.

I knew just the place. The hideously ugly shrub-out-of-control known as Jabba The Hut was going to a new home. And that home was affectionately known as the curb.

Mr. Suburble ripped out the Jabba-shrub one evening while I was out. Such a sweet man. He even dug a big hole for the reservoir to sit in. And while the reservoir was quite large, and it had to be sunk into the ground save for the little “lip” of the top tray…. … it wasn’t in the right place.

“I think we need to move it over a foot.”

So take my advice right now and don’t dig a hole in the earth without checking with your other half. You might end up grumbling and sweating while you shovel dirt that’s already been shoveled.

Finally, we were ready for the gurglers. We started with the largest one, as it was going to be the showpiece of the feature.

Mr. Suburble wheeled it over, and we carefully put it in place, taking care to put it over one of the indented paths for the pump hose. 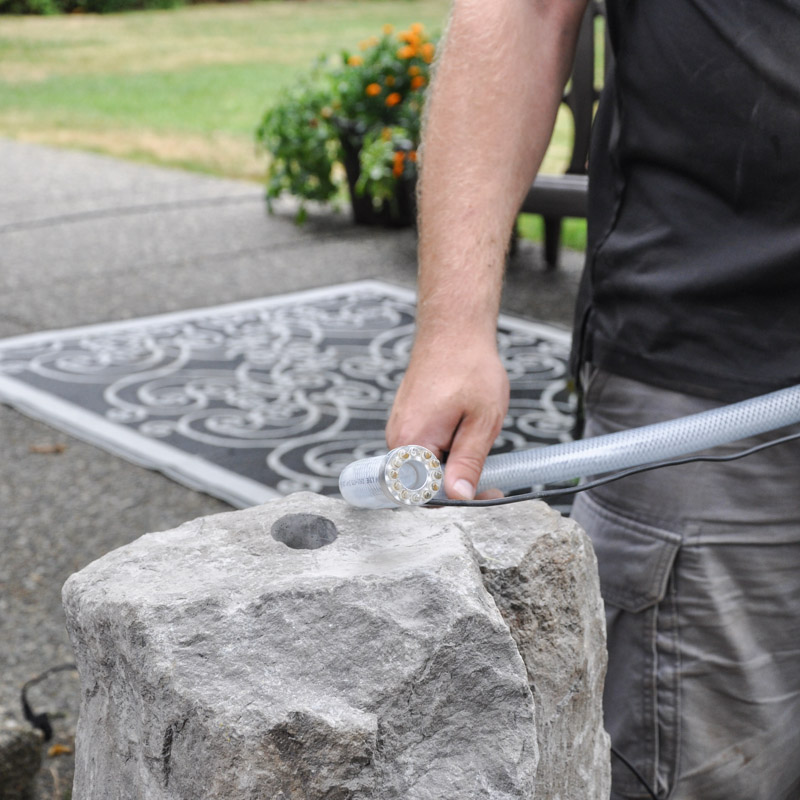 We measured the length of the hose we would need to meet the three-way splitter, and then capped it with one of the LED ring lights. We then fed the hose through the gurgler, being careful to keep the lights at the top of the column. While we don’t always use these lights in the day, they are gorgeous in the twilight. I am so happy that we added them to the fountain.

We went through the same steps with the remaining two gurglers – and once we had maneuvered the large column, the two small guys were a piece of cake. The three-way splitter sits right outside of the pump chamber, and connected all three hoses to the pump.

The little white knobs on each pipe?

Those are the ball valves. They adjust the flow of water coming out of the gurgler. The splitter came with a red piece of plastic in the box, which I picked up and said, “What does this do?” Mr. Suburble called out, “Don’t lose that!! It’s the valve key. It’s how you regulate the water flow!”

It’s how you turn the ball valves. So don’t chuck in the pile of garbage on the patio and head along on your merry way.

I’ve put it in one of my kitchen utensil drawers. I never throw anything out in there. At this point, we filled the reservoir and tested the pump. Once we had fiddled with the valves and gotten the desired flow of water, we started to beautify the surrounding area. We dumped bags of Pebble Creek smooth polished rock around the reservoir and covered it. … but also a bit out of place. I described to my mom on the phone, “It looks as if the earth opened up and a water feature emerged.”

Jabba had left quite the large dirt patch, and I wanted to disguise that. Some black lava rock, a few paving stones left by a previous owner, and two tall planters were added to the space… Everything felt much more finished.

This part of the yard feels really lovely. I am thrilled!

When we sit on our patio, the gurglers are a focal point. The water is a background noise to our conversation…. … and the LED lights keep the chatter going into the evening hours. And because it’s hard to see what a gurgler is doing in a still frame, here’s a little video of the gurglers in action!

Our landscaping confidence has been boosted, and the basalt gurglers have elevated the look of our yard. I am inspired to continue to polish the other corners of our backyard space.

And to entertain… the gurglers have made our patio so inviting that I just can’t help but do just that.

Huge thanks to the amazing people at Northwest Landscape and Stone Supply! Their support of this project has changed the way I look at my backyard! Stone suppliers based in the US:
Marenakos Rock Center
Pacific Stone Company

Mud Pies and Telescopes: Inside the Playhouse