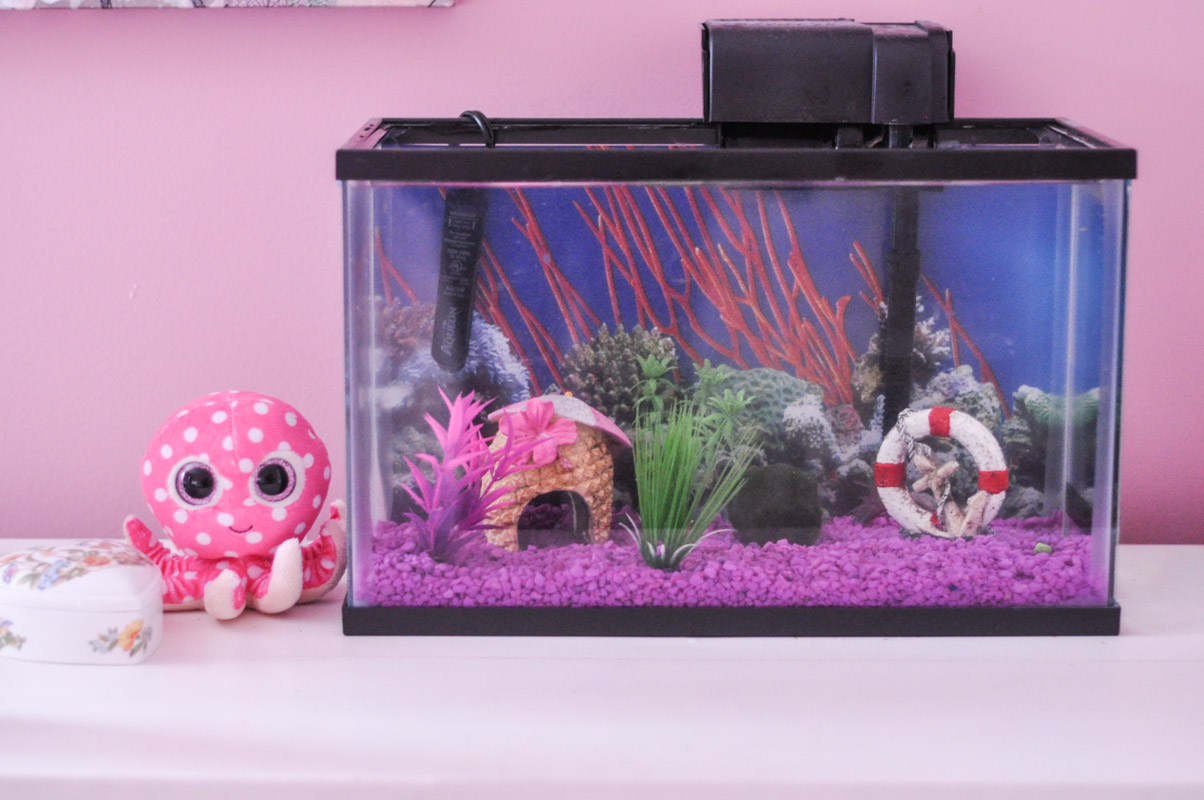 When we were moving from our house to our temporary home (my very generous sister-in-law’s basement), the girls were not entirely thrilled with the upheaval of their little lives.

As tired mothers are wont to do, I decided to bring out a good old fashioned bribe to smooth things over. “When we get settled in the new house, you can have a pet fish! Won’t that be exciting!”

And so the fish became a topic of conversation for nearly a year. “When we get our fish, I’m going to name him Swimmy!”

“Mine will be blue.”

And I let the anticipation tide them over until one fateful day, when the girls and I walked through the doors of PetSmart to look at the guinea pigs and adoptable cats.

We stopped to look at the fish, and before I knew it, I was loading a cart with two 5-gallon fish tank kits. A promise is a promise and these kits were on sale!

I pulled aside a very helpful Fish Expert who told me that my ideas of having a goldfish for each girl was, unfortunately, not going to happen.

Not unless I had a pond or a 30-gallon tank. Goldfish grow to a foot long and can live for decades. Did you know that?

Instead, she guided us over to the Betta Fish (also known as Siamese Fighting Fish) who were flipping their fins in their little cups. She explained that they were relatively hardy fish, but because they were still tropical, they do best with a heater, a filter, and room. 5 gallons was just enough size for them. The fish have been perfect “starter pets” for our girls, as they each have their tanks in their own rooms.

I know that this is not something that every child is ready for – some may overfeed or add not-very-fish-friendly decor to their tanks – but both of the girls are dedicated to keeping their fish alive.

We’ve learned heaps about Betta care. When we first purchased the tanks and fish from PetSmart, we were also told about living moss balls, and how Bettas love to “flop” on them.

They’re not sick or wounded, they’re “flopping”. It’s bizarre, but they do it quite a bit.

Bettas also love to hide away, so they need a little space for that. “Who lives in a pineapple under the sea?”

(One of Taylor’s three names, as Lucy cannot decide for the life of her what name should stick)

Bettas also do best when living alone, though a few not-flashy guppies or a snail could potentially be a good tankmate. They also need relatively soft, rounded edges on all of their tank decor. Otherwise, their fins can get snagged and ripped. We’re also very careful to keep their tanks clean. Fish don’t love ammonia in their tank, and they spend a great deal of time pooping in their own homes, so frequent 20-50% water changes with conditioned water are a must.

We use a gravel vacuum to suck up food and poop and whatever else is lurking in the gravel so that the fish have a clean space to be. What was probably the most fun for me at PetSmart was choosing the tank decor. The girls knew that they had to have hidey-holes for their Bettas, but other than that, the world was our oyster. We tried to do a bit of colour coordination.

Lucy’s tank is blues and greens…. ….and Lila’s tank (housing Emma, the reddy-pink Betta who is really a boy but we don’t worry about that) is pinks and purples.

I do normally keep the lids on the tanks – as Bettas can be sneaky jumpers – but just took the lids off for pictures. Fish experts – don’t worry!

Emma had some stage-fright while I was snapping pictures. She was content to be in her little undersea pineapple and have a rest. But her house is still cute, nonetheless. Having little fishy friends has been good for both the girls and me. Lila and Lucy are responsible for feeding their fish, and they let me know if anything seems off. I often see them staring at their fish as they flit around, getting little bits of Betta flakes (or on a generous day, blood worms) from the water’s surface.

I clean the tanks and the filters and check to be sure that everything is tickety-boo in fish land. It’s a good arrangement.

And the quiet hum and gurgle of the filters act as white noise when it’s time for bed. This mama will take that any day!

Disclosure: This post was sponsored by PetSmart through their partnership with POPSUGAR Select. While I was compensated to write a post about PetSmart, all opinions are my own.