Setting The Table: Mason Jars and An Unexpected Fabric Purchase 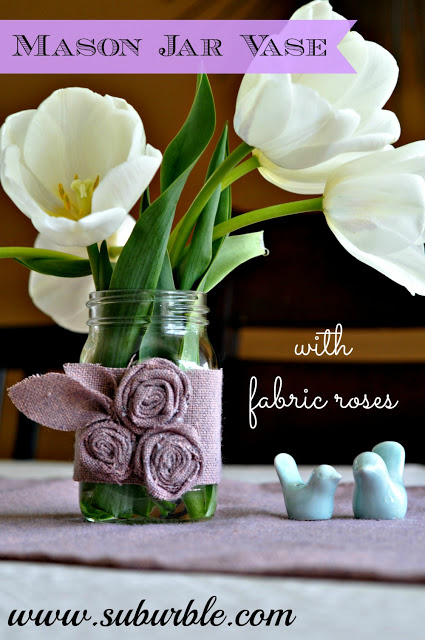 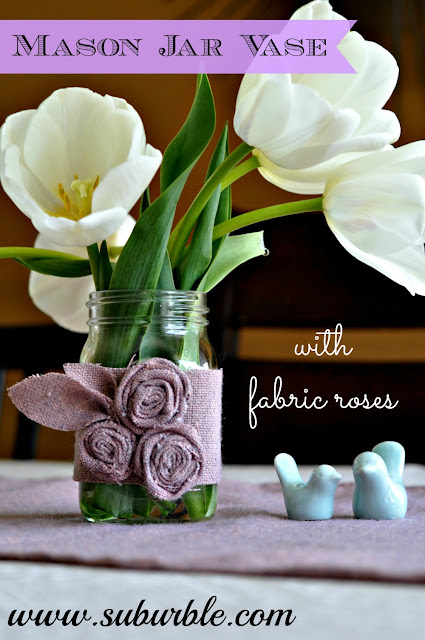 This past weekend it was Hubby’s birthday. We had a gaggle of family members over for dinner, and I had planned to use this as an opportunity to get a new table runner (as they are one of the more useful things in the linen closet – you can get far more life out of your tablecloths, because your runner hides all of the stains!).
The trouble is, our table is gargantuan when it’s set up with the leaf, and finding a table runner to stretch from end to end is not only difficult, but also expensive.
The girls and I were wandering through Wal-Mart’s craft section when I came across this length of fabric. It’s a remnant of tweed (albeit a large remnant) that was chucked into a clearance bin. I snatched it up immediately. I could make my table runner from this! 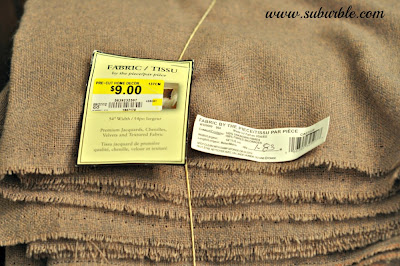 After a few pin-pricks to the fingers, some unexpected attitude from the bobbin in my sewing machine, and a husband who ate all of the nachos while I was holed up in my craft room (not that I’m holding a grudge), I had finished my table runner! 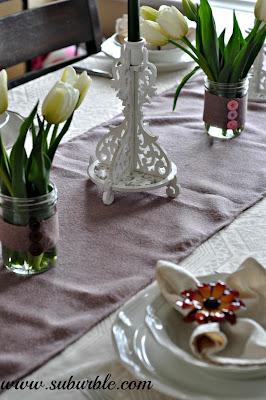 And ain’t she pretty?

Of course, I also had envisioned a beautifully adorned mason jar vase with smiling white tulips.

But I ran out of time.

I was cocky and I waited until the last minute; suddenly, I realized: guests would be arriving in a half hour! I grabbed the glue gun and some buttons and started gluing/burning-the-living-crap out of myself. 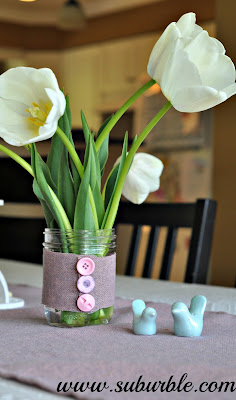 And it was fine for a dinner party with family. I had to remind myself that nobody else sitting at the table was a blogger who was interested in gluing clearance fabric to a mason jar and making it look gorgeous. Buttons are cute! It looks like the jar is wearing a sweater that his grandma made for him.

And yet… that more-complicated project was still bouncing around in the back of my mind. 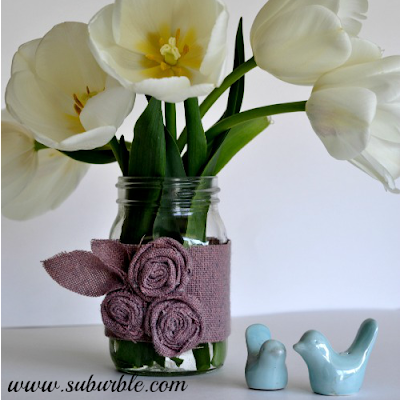 These fabric flowers just sort of happened in my hands as I played with the fabric (along with copious amounts of red-hot-burning-glue. Does it have to be THAT hot?). They were loosely based on a tutorial that I found here.

I slapped them onto a mason jar and then partnered them up with a couple of little fabric leaves. 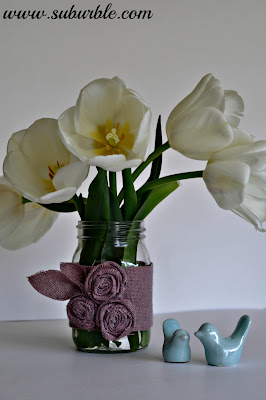 And I love how it turned out. The roses are so simple, and so pretty!

I was even more tickled that the vase matched my table setting. You can guess that I’m going to be buying fresh flowers over the next few weeks. I didn’t get blisters on my fingers just to put this jar in the closet. No ma’am. We’re admiring these rustic blossoms for at least a few weeks.

This is Me: A Self-Portrait Challenge