This is Me: A Self-Portrait Challenge 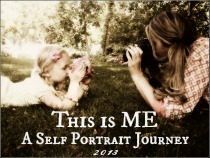 When I started this blogging adventure, one of my posts received a comment by a fellow blogger named Amy. She said some very kind things about my blog, and as a result, I followed her back to her own blog (While Wearing Heels) and fell in love with her work. I guest posted on her blog (huge thrill – first guest post ever!) and in between all of the postings and the blogging and the commenting and the emails, we became friends.

Amy holds an amazing link party on her blog every month. It’s called “This Is Me: A Self Portrait Journey”.

She challenges other women to take pictures of themselves, rather than to constantly be the ones behind the camera.

It’s something that we don’t often think about – or worse, we shy away from.

We duck. We hide. We sabotage ourselves by sticking out our tongues or making funny faces.

And Amy is asking us to stop doing that. Instead, she asks that we get in front of the camera and record those memories. So that when our children thumb through photo albums (or photo books or iPhones or whatever they’ll be flicking through), there will be pictures of us. Frumpy, pony-tailed, muffin-topped, beautiful, happy, loving women.

Each month, Amy selects a theme. This month is “Love”. Typically, photos are taken within that 30 day frame, but I’m going to use my creative license here. Instead, I’d like to share a photo that was taken a few years ago. 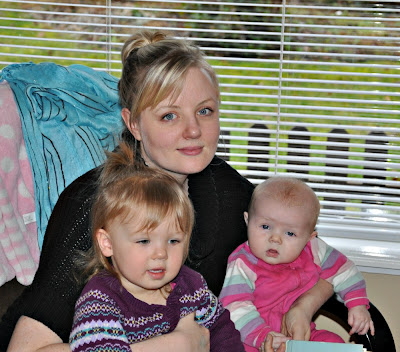 Hubby took this photo. It is not the most flattering photo of me, but for the longest time, I thought that it was. Lucy was four months old in this photo. Lila was 22 months old. Yep – do the math. They’re 18 months apart. And at the time that this picture was taken, they were my world. My whole all-encompassing existence was these two little girls.
(Who am I kidding? They’re still pretty much my whole world… but when they were both under 2, it was pretty much my morning-to-sunset).
And when Hubby saw this picture again just a few weeks ago, he said, “You look so tired in that photo.”
I looked again, and I saw it. I saw how tired I was. How my smile was not entirely a smile (probably because it was sleeping). How my arms overflowed with babies. But I loved it. I loved all of it.
Friends have asked me, “Don’t you remember how hard it was back then?”
Nope. I can’t, really. Momnesia is a powerful thing. I can’t remember much of the tiredness, the piles of laundry that grew around us, the week where Lucy cried for hours every day… I just remember having my arms full of wriggly little girls.
And that’s why I love this photo. It’s unflattering, poorly lit, there’s a ton of crap on the back of that chair, and Lucy looks like she’s half-baby-half-little-old-man. But to me, it reminds me of the love I have for these two little maniacs.
It’s the kind of love that makes you think you look good when you’re dog-tired and appear five years older than you really are.
I invite you to join Amy’s party.
Share a photo of yourself along with many other awesome women.
Follow Along!

The Playhouse Project: Chairs for Lounging

Setting The Table: Mason Jars and An Unexpected Fabric Purchase