DIY Glitter Shoes – For The Little Girl Who Loves To Sparkle When you hear the word “glitter”, what immediately comes to mind?

Is it Tinkerbell’s fairy dust? Is it unicorns prancing through a field of wildflowers? Is it that not-very-good movie featuring Mariah Carey?

Well, for me – it was panic. Being in the Top Ten of One Artsy Mama’s One Crafty Contest, I was faced with the prospect of creating something totally and utterly fantastic with glitter.

*Spoiler alert* I ended up getting knocked out this round (sob!), but I’m still pretty happy with the way my project turned out. And Lila is absolutely thrilled!

I decided to try my hand at glitzing up a pair of old scuffed party shoes that we had hanging around the house. And when I say scuffed, I mean… these shoes were on their way to the garbage bin. Unless “distressed faux-velvet” is a new trend in fashion (and if it is, please let this out-of-touch lady know), then these shoes needed some serious love. I have to warn you – when I was making these shoes, I had some extreme doubts. I was snapping photos while muttering obscenities under my breath. Hubby would occasionally look over at me and ask, “Are you okay?”

This is when I would mutter even louder, or start to bang things around in frustration. I think it must be instinctual that I do this – I’m warning my mate that he should stay away from me, lest I accidentally wound him in a craft-rage.

I used Ashley’s extremely awesome tutorial for Mod Podging shoes (from her blog, Make it and Love it) to set the “base” for these glittery shoes. I have to say, Mod Podging shoes is surprisingly easy! I’m going to be giving some slightly-ugly shoes a closer look now – I know that I can easily transform those babies.

I will add a tip, though: use containers that you grabbed with sticky Mod Podge-y hands from the Tupperware drawer as pedestals for your shoes. This will save you from having to hold gloopy shoes while you try to create an even coat of Mod Podge. And if you’re a crafter who is saying, “But Mod Podge is water-soluble…. that isn’t going to work on shoes!” Well, then let me introduce you to regular Mod Podge’s handyman cousin: Mod Podge Outdoor!

Yes, your mind is blown. I’ll give you a second. Once the fabric had dried, I applied another coat of Mod Podge and then shook some white glitter over the shoe. I let them dry again, and then covered the glittery surface (carefully) with another coat of the outdoor Mod Podge. Back onto the pedestals they went, and they stayed there for the night, while dreaming of fairy princesses and sparkly butterflies. I went to sleep and twitched and turned because I just was not sure about these shoes. Were they really just a huge disaster, and I wasn’t seeing it?  Could I come up with another project in under a day and a half? Gah! The next morning, I grabbed some light blue ribbon from the craft room and cut small snips about halfway through the width of the ribbon. This is so that the ribbon will bend along the curves of the shoe without creating lumps and bumps and wrinkles.

I used a hot glue gun to secure the ribbon to the shoe. Everything was going pretty well until… I was distracted and accidentally burned myself. Badly.

It was one of those burns where you drop everything you’re holding (glue gun, shoes, ribbon and all) and rush to put cold water on it. But t was too late: an angry white blister was already forming at the top of my thumb. And it throbbed.

I knew that I had been careless and perhaps even a bit cocky with that red-hot glue gun. I was briefly tempted to throw everything into a giant pile and then stomp away to cry over my thumb. But I stood my ground. These shoes were going to get trimmed out and be beautiful, dammit! I was doing this.

But I didn’t take any more pictures. Sorry guys. You can just imagine the sweat on my furrowed brow as I wrestled with the ribbon and the shoes and the glue gun (which I was a teensy bit afraid of by now).

But after the frustration and the occasional coddling of my blistered thumb, I had something to present to Lila. Something that we both loved.

Isn’t it funny how all of that doubt can be for nothing? Lila adored her party shoes. She danced on the patio while staring at her glittery feet.

After trimming the shoes with the ribbon, I whipped up two little bows and planted a sweet little robin’s egg blue button in their centers. I thought it was the perfect way to finish off the shoes’ transformation.

It wasn’t until I took a step back and looked at how adorable these shoes were that I realized that I had been on the right track the whole time. It was definitely a bumpy track – and there may have been a few derailments – but it was still the right one. 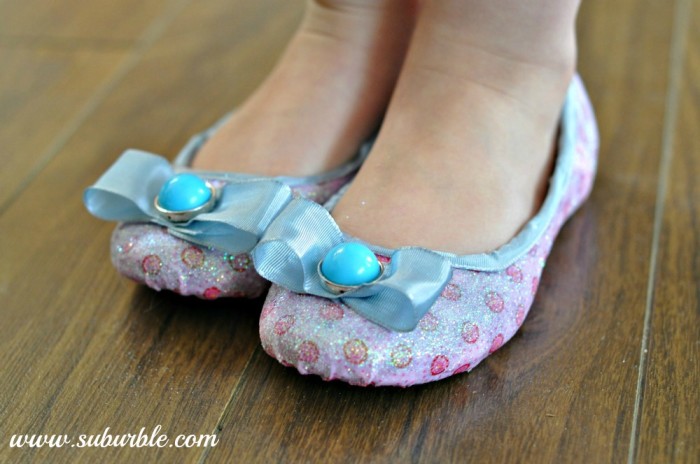 Sometimes it’s fun to have a little bit of bling in your outfit – and why not wear that sparkle on your feet? Dig out those tattered old shoes and dress ’em up! You’ll be amazed at what you can accomplish!

And be careful with the glue gun. Those suckers are dangerous!

Where Home Is: A Gift for A Military Family

The Kiwi Crate: Just A Couple of Birds And Their Nests...