This Year of Gardening: How did we do? 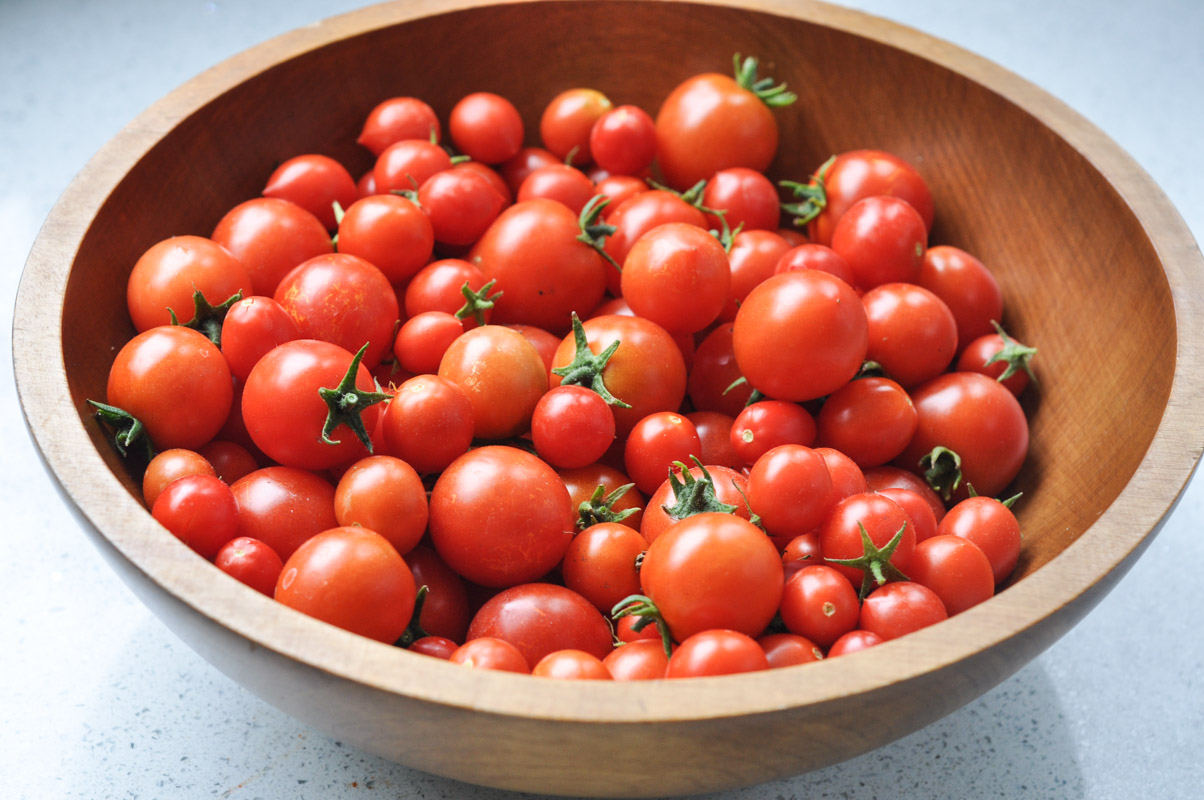 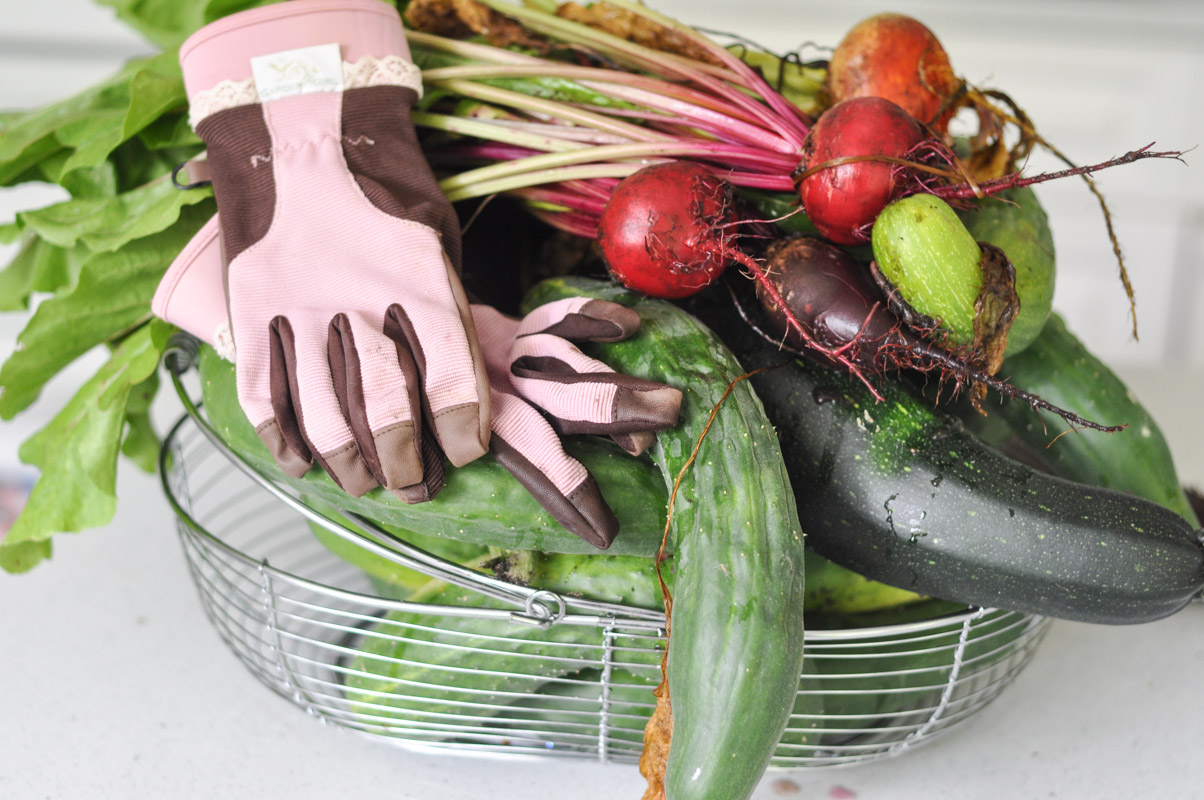 In the springtime, I walked into the backyard wearing a determined look on my face. “I will make my garden a success!”

Mr. Suburble stood a few paces behind me, holding a shovel and a hammer… wearing a less-determined face.

As he’s often joked that I can grow the “$50 tomato”, I will admit that starting off a garden project is NOT cheap. This is especially true when you’re married to me.

We needed more garden beds, which meant we had to haul home wood and fasteners to make boxes. And what would fill those boxes? We brought home a truckload of organic mix.

Hadn’t we always wanted to build a greenhouse? And didn’t my parents have the windows just taking up space in their woodshed?

*This is the part where Mr. Suburble raised his eyebrow* 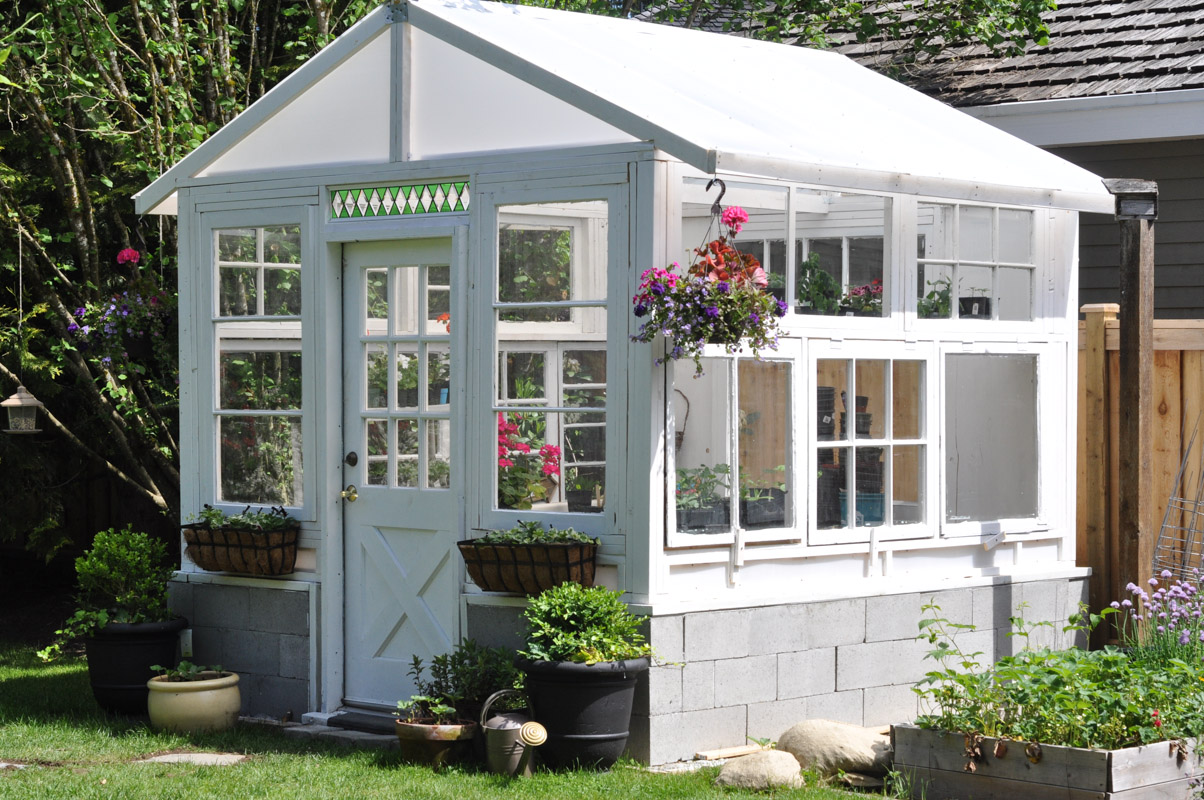 But we did it! We surprised ourselves – and various friends and family members – and created a space to keep out little seedling babies warm in the cool Spring months.

Yeah, maybe the roof blew off in a windstorm, but that’s another post. 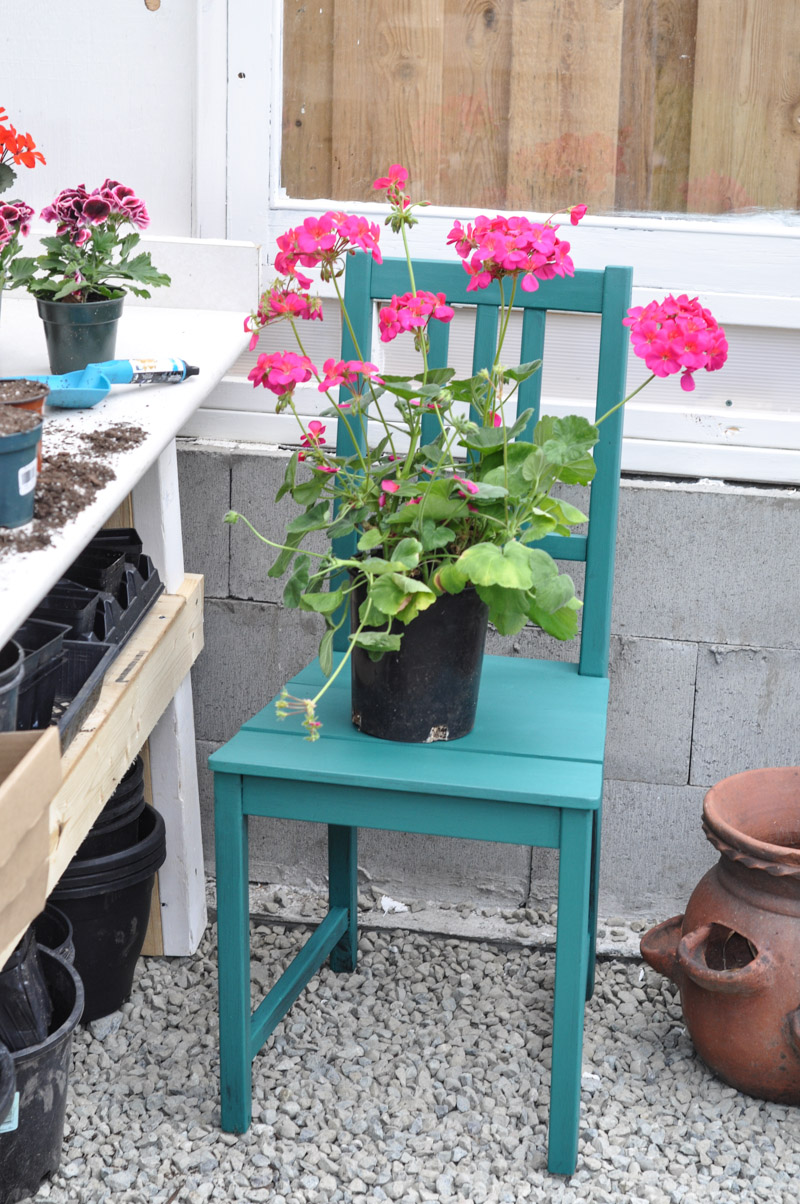 What’s important is that things grew! 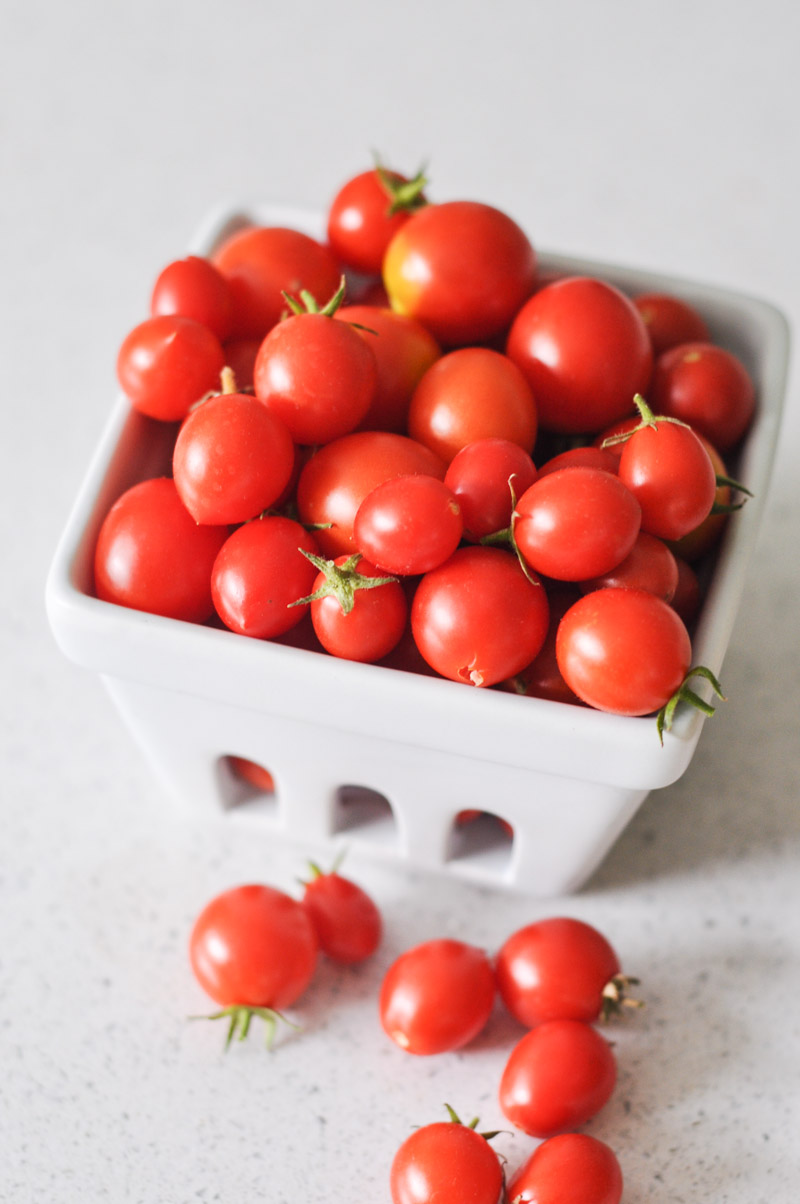 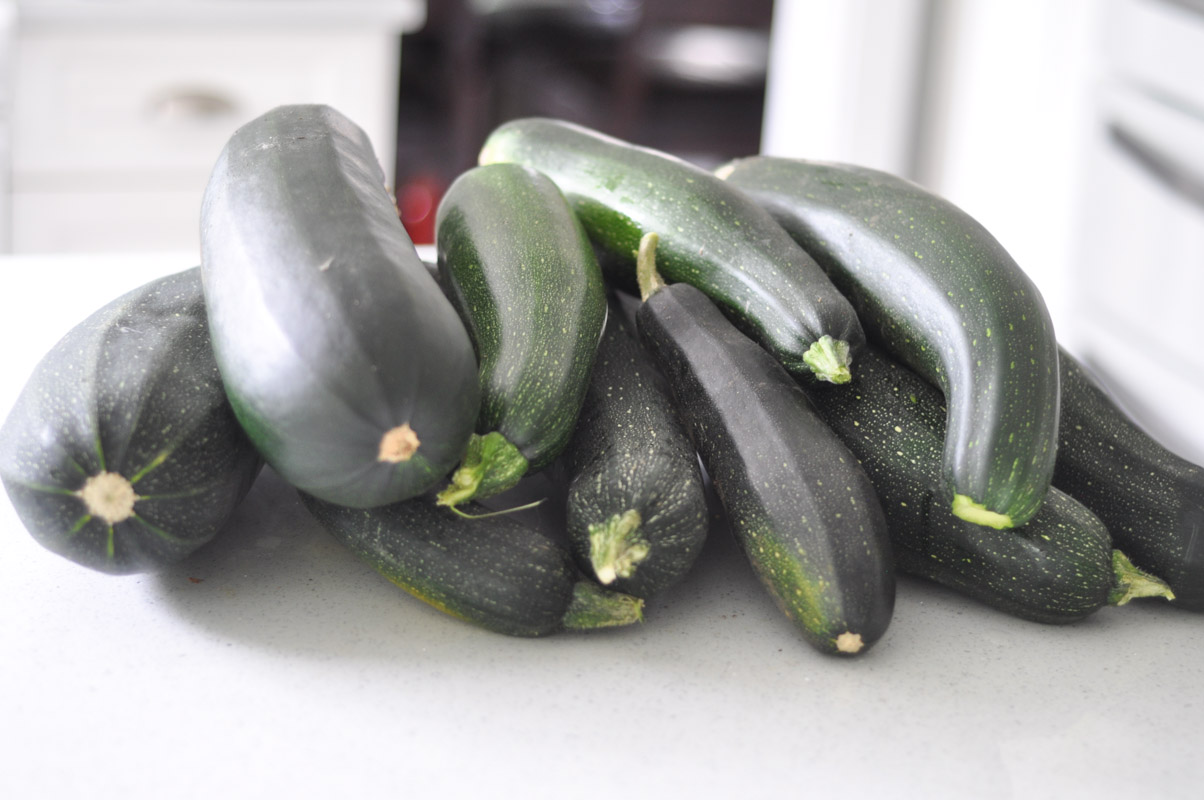 …. and more zucchinis than I could ever need.

I actually started to resent my zucchini vines as I stood in front of the food processor, grating squash for what seemed like hours. Okay, it was about an hour, but I very done with zucchini by the end of it all.

I couldn’t even give them away!

But not every crop was a success…. 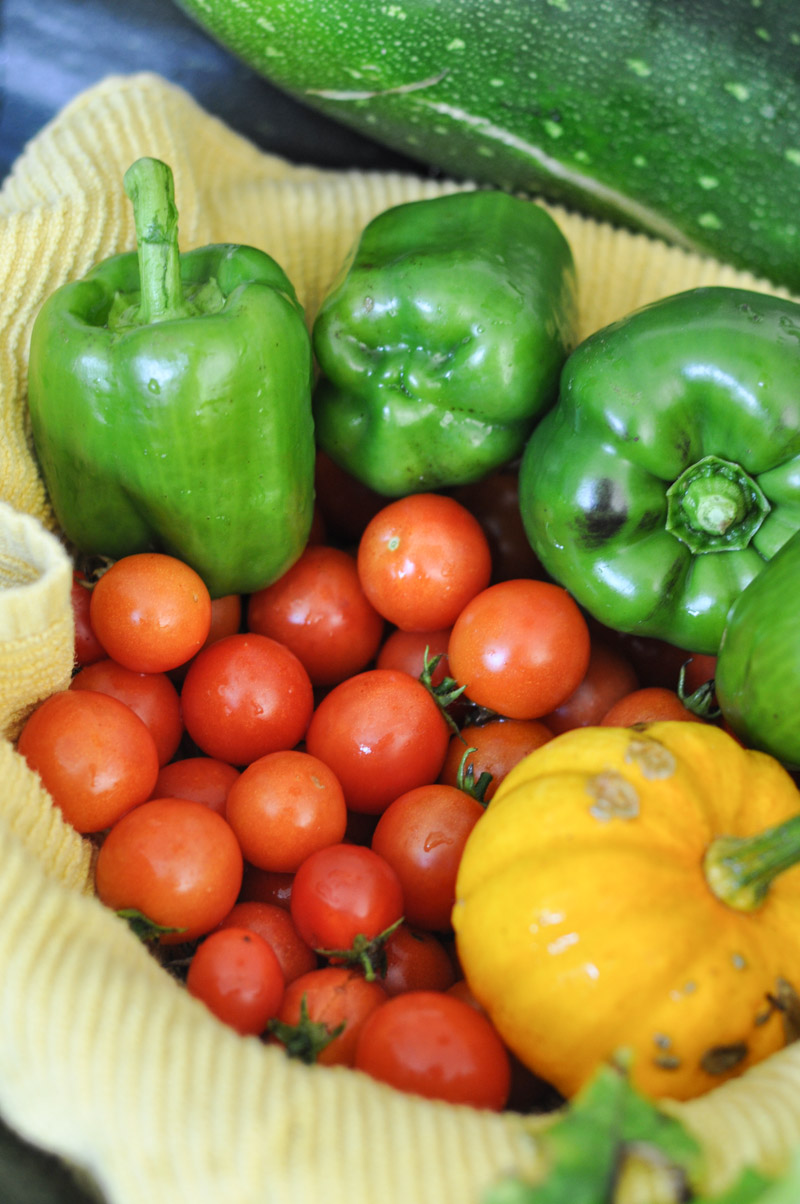 The green pepper plants were a pet project of mine. Despite Mr. Suburble’s hatred of bell peppers,  I wanted to grow them, and had tricked myself into thinking that I would have a buckets full of peppers, and wouldn’t know what to do with them. Worth hundreds of dollars, no doubt. Because peppers are basically worth their weight in gold at the grocery store.

I didn’t realize that almost half of them would rot right on the vine.

I was waiting for them to turn yellow, and they skipped all of those colour-changes and went right for goopy and brown.

Ugh. Next year they’ll stay in the greenhouse until the not-so-bitter end. I’m making that decision right now. 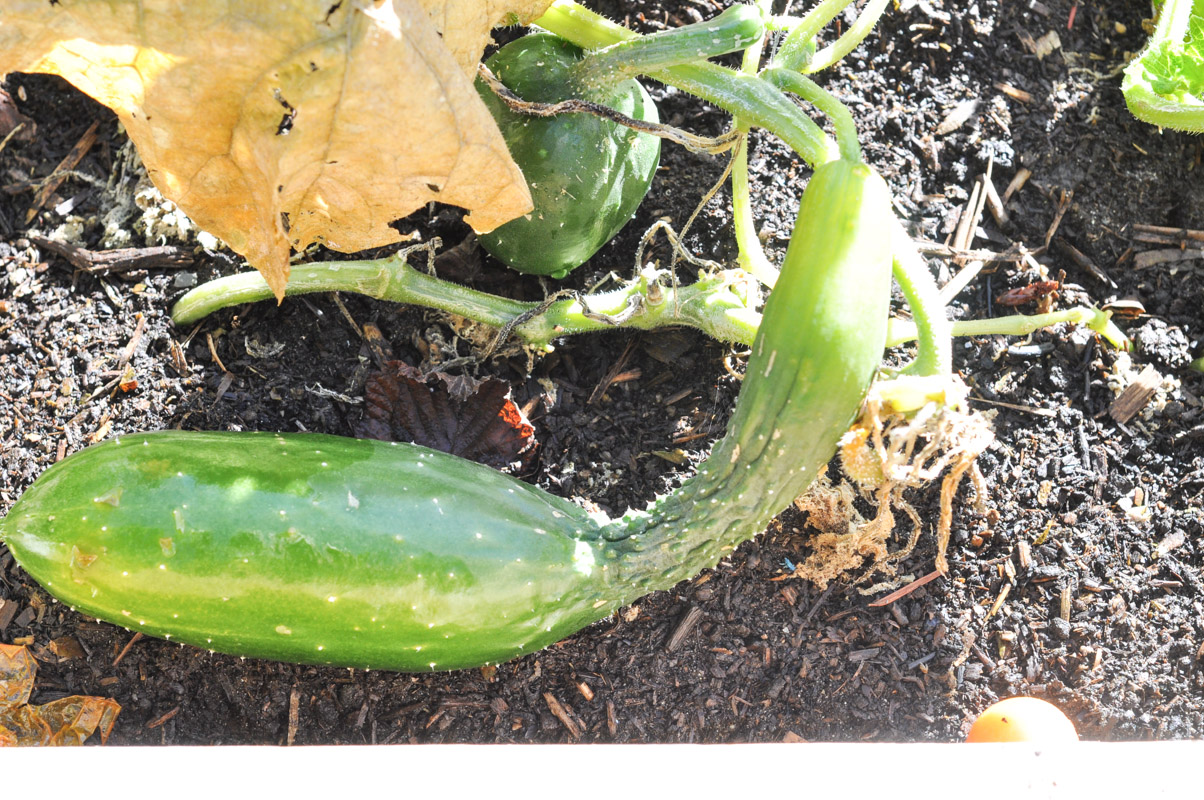 I have no idea what happened to this cucumber. It does look a tad frightened, though. 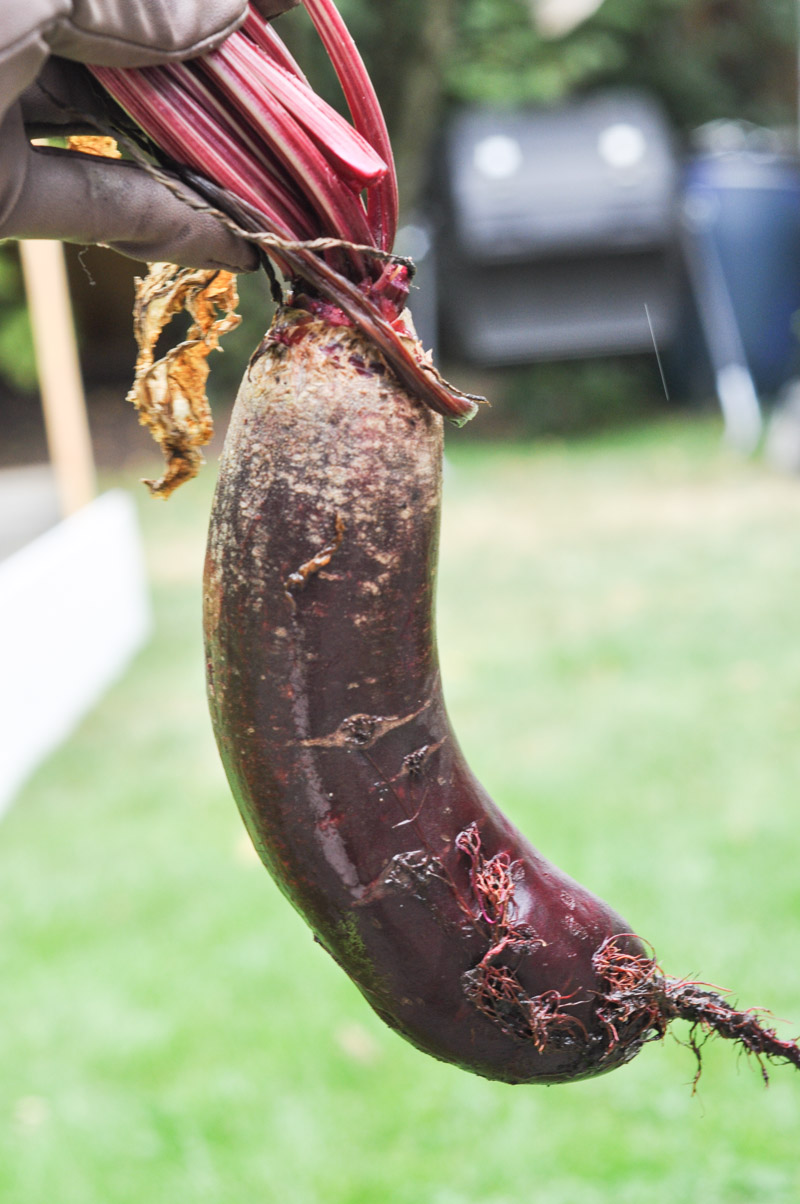 This is something. Ain’t it pretty? 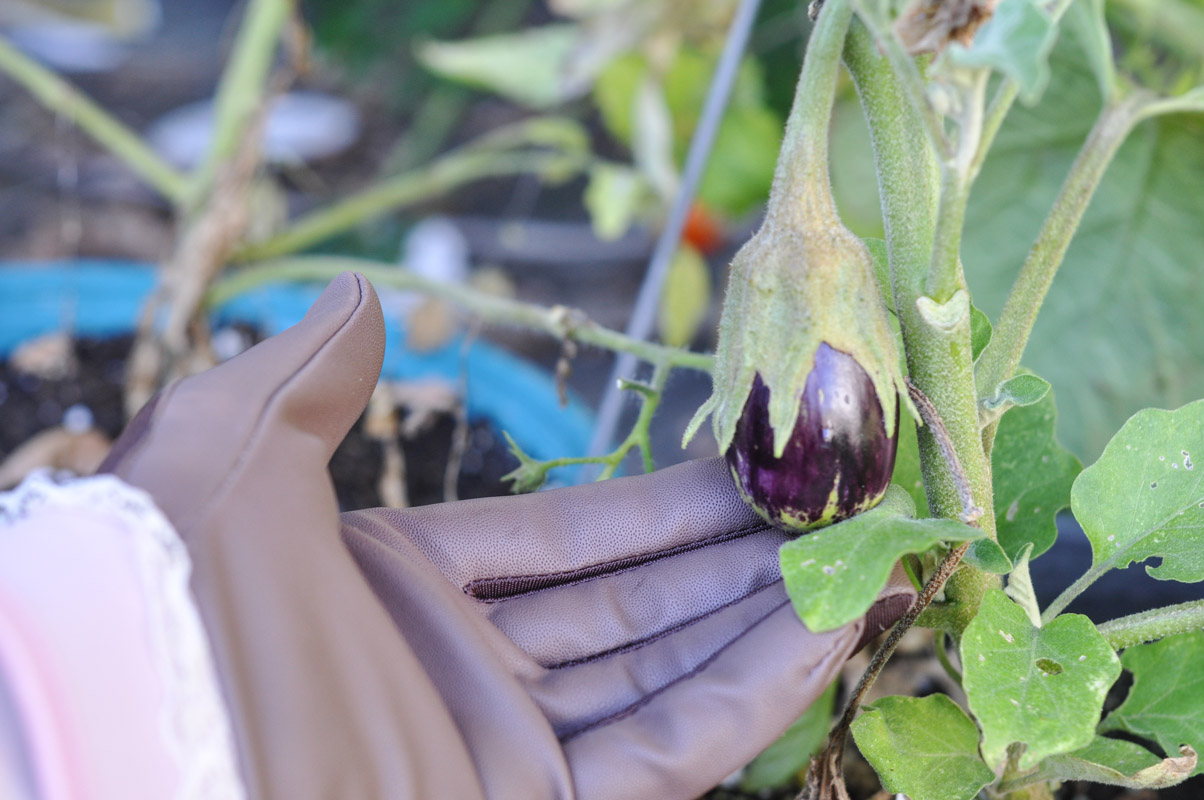 And then there was this little purple orb of pride in my garden. The eggplant!

I was so tickled with myself. Look at that moussaka potential right there!

I fawned over this little eggplant as it grew…. I sang to it… I moved it out of the rain…. 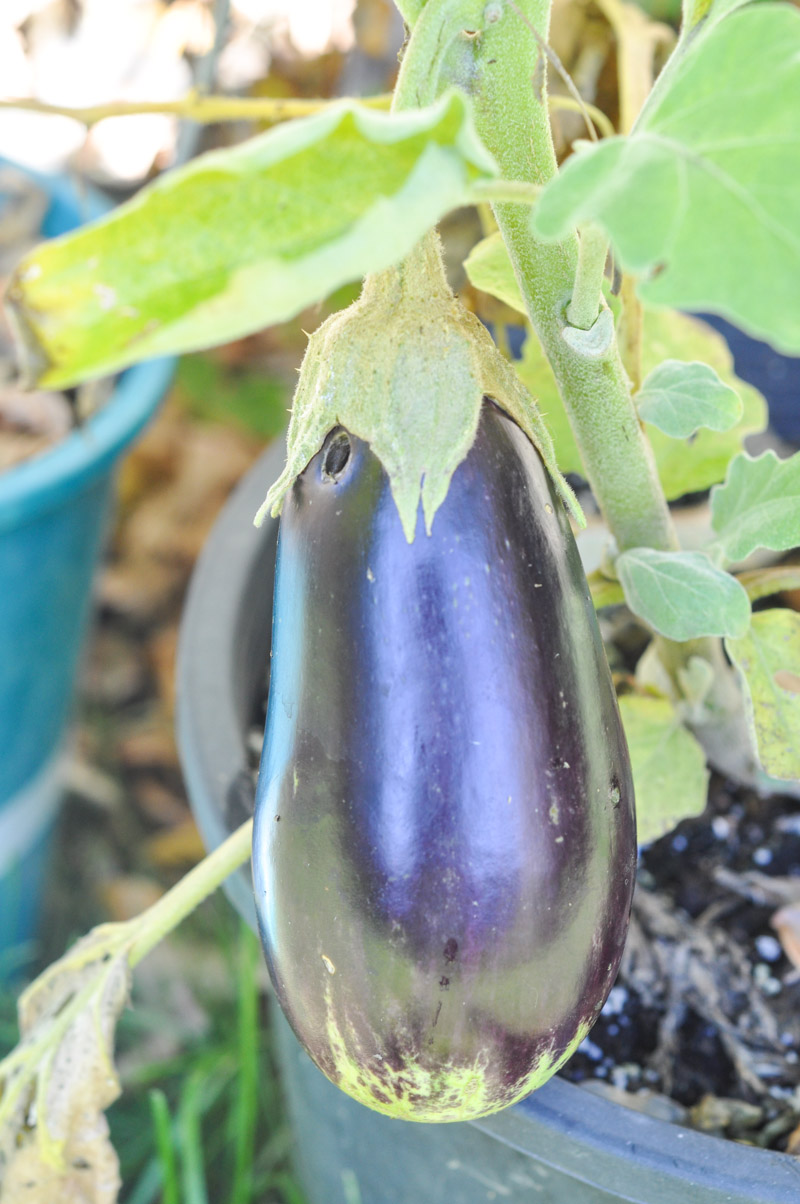 … and then this happened.

See that hole in the top of the eggplant? Some jerk of a bug or a slug or a garden-pillager snuck into my eggplant in the dark of the night and ate half of the insides!

I have four thousand zucchinis and about a hundred ugly-looking cucumbers, and you decide to climb up the vine to eat this one, special-snowflake eggplant?

Ugh. And that was the end of the eggplant experiment. 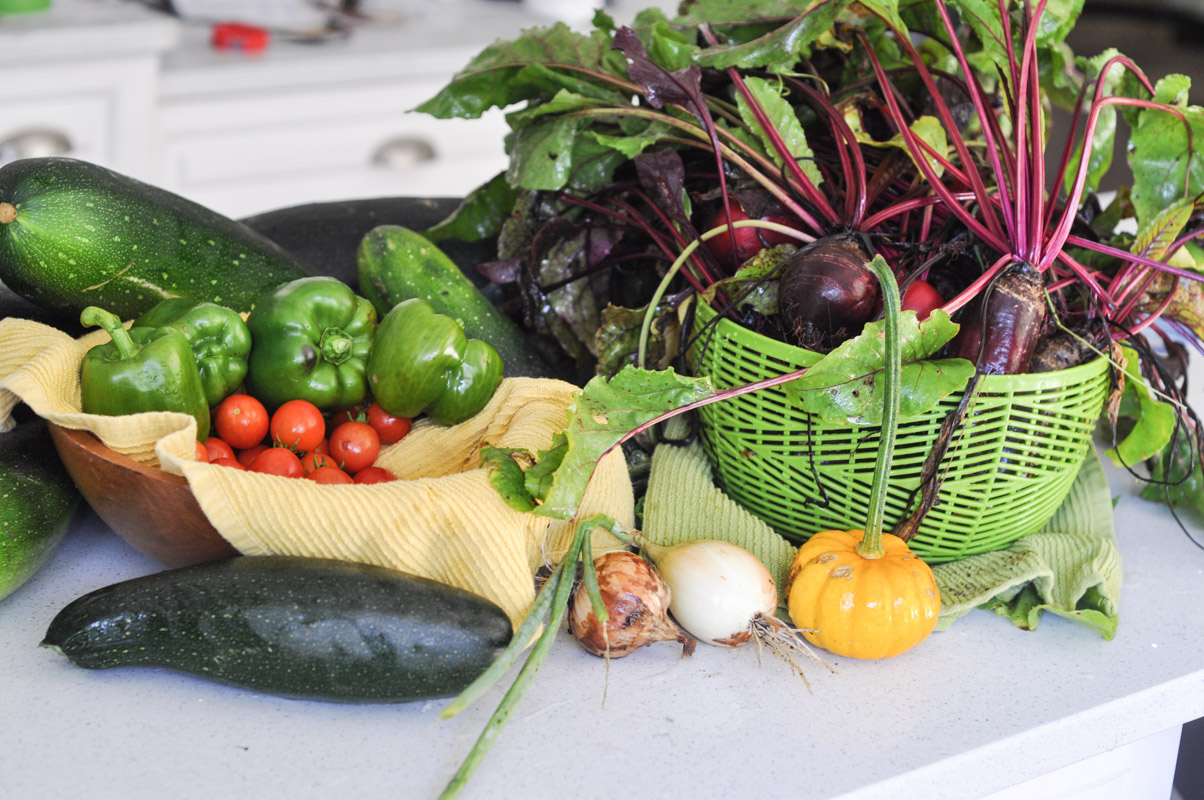 But we had some other great harvests. I managed to grow a few onions and some mini pumpkins.

And our beets were plentiful! 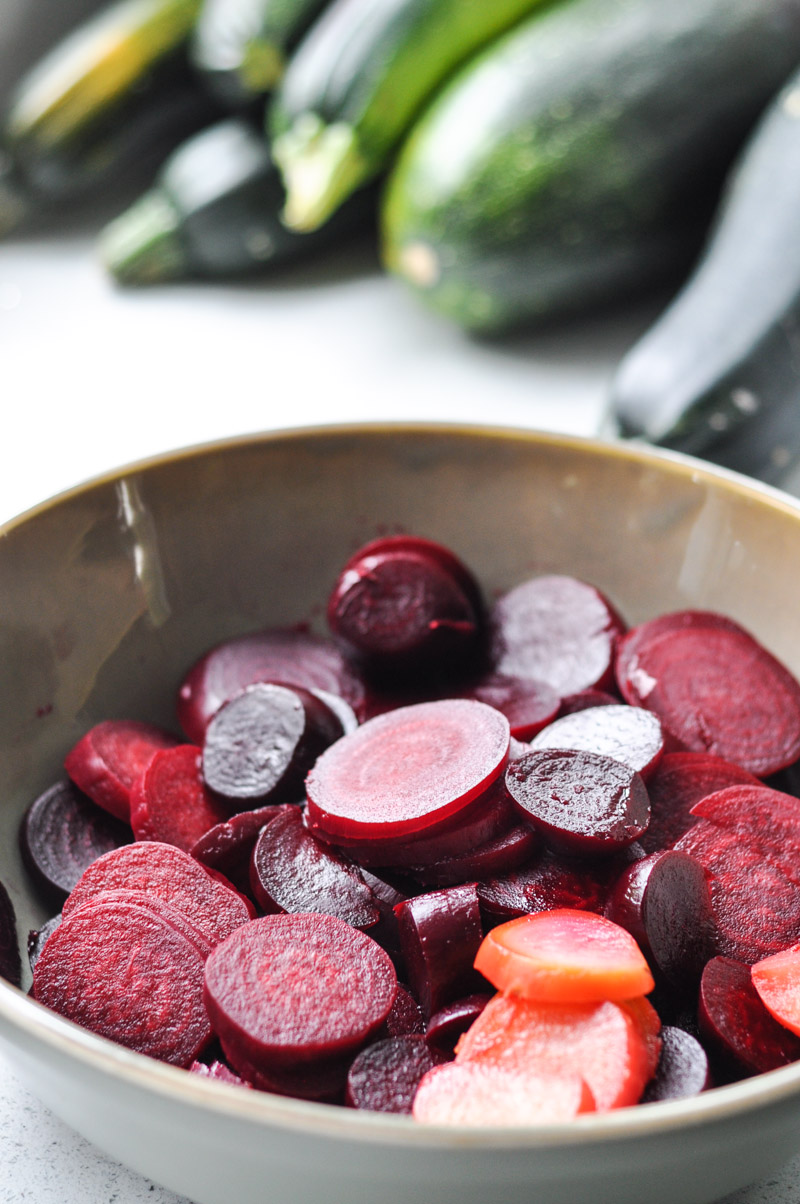 I pickled and canned them in a fit of domesticity.

I really need to learn how to grow broccoli. That’s a veggie that pleases his tastebuds.

Now that we’ve put the garden to bed, and we’ve fixed the greenhouse roof, we’re ready to hurry-up-and-wait until next year.

It was a mixed bag of a year. There were some hideously ugly vegetables. And then there were a few pretty ones.